How to join Speakers and Host on the Live Stage during Session? Print

Yes, more than one attendee can join the speakers on the stage. However, it’s advised to not have more than 10 people on the stage at any time.

You can bring attendees to the stage using the following two features within Airmeet:

1. Raise Hand: During a session, attendees can click on the "Palm" icon on their middle bottom of the screen to request the host to allow them to join the speakers on stage. The host has the discretion of either accepting or rejecting such attendee's requests.

Only one attendee at a time can join the stage through the "Raise Hand" option. The attendee on the stage has to be removed by the host after their presentation end to accept another attendee.

2. Invite-to-stage: During a session, the host can request any particular attendee to join the speaker on stage. In this case, the attendee has the discretion of either accepting or rejecting the invitation. However, the host can invite any attendee(s) to stage as many times as required. 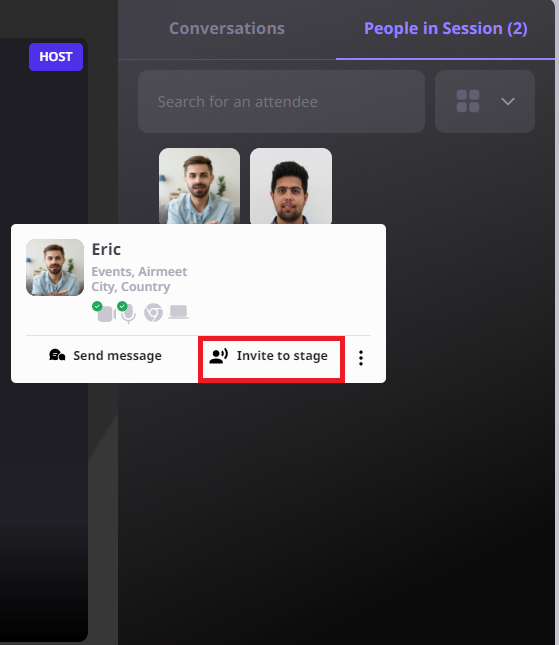 Note: As a host, you can remove any attendee who joined the speaker(s) on stage at any time during the session.

Did you find it helpful? Yes No

Send feedback
Sorry we couldn't be helpful. Help us improve this article with your feedback.